Hey everyone, today's Post 468 and over the course of my blog I've been given a lot of great opportunities, whether it be radio interviews or going to promote nature at national science fairs, it's all been great. One of the things that I've had the chance to do lately is something I never thought I'd get the chance to do. That is to be a patron of something, but recently that's just what I've been asked to do!


I live in a wonderful part of the world in my opinion, and surrounding me are lots of beautiful parks like the North Yorkshire Moors, and the Yorkshire Dales, but one that a lot of people won't know about is the Nidderdale AONB. This is a wonderful part of the world with what seems like a lot of lovely people. I've been to places there before like the wonderful World Heritage site of Fountains Abbey, and the amazing Brimham Rocks with its fantastic formations, but I've come to realise just how special this area is because of a wonderful project called The Wild Watch. This is a project run primarily by a lovely group of people who have asked me to be the Youth Ambassador for the
project. Of course I jumped at this idea and since then I've been attending whatever events I can get to and doing my part for the project. So far, I've been to three events, and I'm going to give you a run through of my favourite parts of them all. But first, I want to give a big thank you to the Yorkshire Wildlife Trust for suggesting I get involved and to the Wild Watch for agreeing and for giving me this absolutely amazing opportunity.

Anyway, here's a little bit of what I've been up to so far:

The first event I went to was a training session where about 20 people or so attended to learn how to do river surveys. The main aim of the project is to map the wildlife of Nidderdale and to do this they are using volunteers to survey 50 key species across the AONB area, species of national and international conservation concern. Of course I wanted to get involved and so I've started get along to a few very interesting sessions!

The first session, the river survey training, was run on a school day but luckily my school is very supportive of what I do and gave me the day off as they have on all these occasions (but I do have to catch up on the work I miss!!). For the first hour or so we went over what the project was, and we were told which species we had to look out for and the key signs to look for to tell if they are present. The ones that I am most interested in are the Otters, Water Voles, Himalayan Balsam and Azure Damselflies. At this point, we were also given our 'transects', which was a small plot of land in the Nidderdale area which follows one of a few rivers. After we were told about everything, we went out on a sort of guided walk around the Millenium Gardens in Pateley Bridge and along the river there. We were told mostly how to find Otters and Water Voles, and the signs that they were around. These included looking for droppings and prints. I now know how Otter spraint (otter poo to you and me) smells! Eventually, we all went down to Hackfall Woods, which is a beautiful area which I hadn't explored for years. We went round essentially doing the same thing as we did in Pateley, but instead, we were given our own maps of the area and were given a little more freedom to put into action what we had already learned. All in all, this was a great day and I had a lot of fun, even though it was swelteringly hot!

Can you help? We are looking for volunteers to help with surveys. No exp nec. #citizenscience #volunteers https://t.co/yOo36EN12L pic.twitter.com/tyeiD3swjF
— TheWildWatch (@TheWildWatch) 29 June 2017 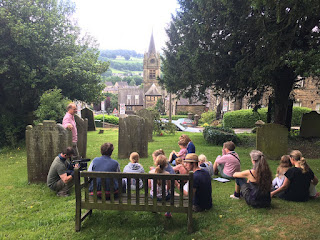 The next event I went to was the Bird Song Chorus event, run by Peter Cowdrey of Planet Birdong and Isak Herman from Cambridge University. They are two wonderful people that I had a great time talking to and learning about what they do and the best ways to do it myself. Firstly, Isak introduced us to a couple of games that he had made which are designed to help people identify the different birds, and their calls, in Nidderdale. There were a couple of games, the first was a memory game where you had to flip over the different tiles and remember where the different bird was. As you flipped the tile over, the bird's call played as well. As you progressed through the levels it started giving you the call along with a spectograph of the birdsong and again you had to match them up until eventually you were only given the bird's call. Isak also gathered some data from us all which was put together to help him learn about how we all enjoyed the games and what we learned. In the second session, Peter started talking to us about how we can make music out of bird's calls, and then proceeded to get his trombone out and mimic a goldfinch call which had been slowed down! I have to admit, it was very clever how he could imitate and make music out of a bird's call, especially one as fast as a goldfinch's! Throughout the rest of the day, he kept on talking about what you can do with bird calls and the human voice. He also showed us a primary school boy who was recorded singing the goldfinch call which was sped up to sound just like a real one! Doing this you can get
human calls so good that the birds will respond to them! We also got out into the church yard in Pateley to listen to calls and we were treated to a little Goldcrest singing for us. Apart from that, that was about all, it was a great day again and taught me a whole lot about bird calls, how they are structured and how birds use them.

The final and most recent event I went to was the Wild Watch Launch event where I had been invited as youth Patron to give a talk! There were many other speakers over the course of the day, most of which I was surprised to see were Professors and Doctors! We started out downstairs in a lovely little building called 'The Playhouse' in Pateley Bridge. We were mainly all just chatting to each other about other little projects we were doing and about the Wild Watch in general. When it was time to begin, Paul Burgess, the AONB Manager, introduced us to the day's plans and what was going to be taking place. There were many great speakers there and I think everybody there was captivated by what was being said. Eventually though, it was time for my talk. I'd been rehearsing for about a week and I think it went alright. My talk was about engaging the next generation of conservationists, and I went over a couple of reasons that I think why most people my age aren't into nature, and what I think the solutions are. It was my first public presentation like that and I was a bit nervous but it seemed to go very well and lots of people said afterwards that I'd done pretty well.

Well after talking to the people after all the presentations Dad and I went off to our river transect and did our first survey. We've got an old Victorian lake that makes up most of ours. It's a really nice place, it's a bit like a totally forgotten place that's been left to get overgrown. Makes it a bit tricky to survey but it's very, very tranquil and full of wildlife. Not so much of the wildlife that I was looking for, though we found Otter Spraint, but lots of lovely creatures to see all the same. I'm looking forward to going back.

I'm also looking forward to  learning how to do surveys for reptiles and getting involved in that. I hope I can learn the signs to look out for Adders and Grass snakes in particular!

Overall I think this project is really amazing and I hope you will all join me in supporting it!

And if you live in Yorkshire, get involved!