Hey everyone, today's Day 250 and as I saw a BBC News article about MP's debating the Hunting Act next week. This was a big co-incidence as I thought day 250 would be a good time to revisit the post from Day 200. In that post I wrote out the letter that I sent to the Prime Minister David Cameron, Rishi Sunak my local MP and Nicky Morgan the Secretary of State for Education. I received some replies a little while ago but I wanted to wait until this special occasion. In this post there will be a little bit of input from me but mostly just the pictures/screenshots of the replies that I got: 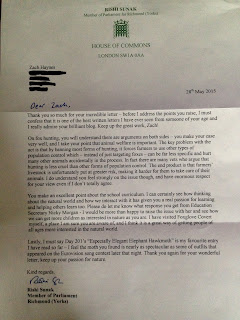 So, here is Rishi Sunak's.


It's a very nice letter, I was very pleased to get it and it was the first I received.I am glad that he replied on both issues, but I don't agree with him on Fox Hunting, as I feel like there are more ways of population control, if that is indeed the reason. It's a shame he doesn't cover what the non-specific methods are he mentions as I can't consider his side properly. Surely the quickest and most painless way of population control would just be a clean shot-in-the-head by a skilled marksman.

There wasn't much of a response regarding the curriculum but I am at least pleased that he agrees with me. I need to write back to him on this as you'll see from the next post I didn't get a useful answer really. 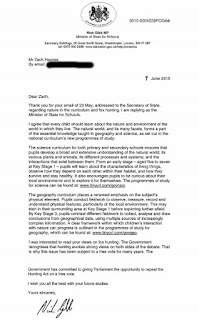 As you can see it was passed to the Minister for Schools to reply. I had a quick read through some of the curriculum information with Dad. We decided that I hadn't asked my question carefully enough. Some aspects of nature are in the key stage 1 and 2 curriculum but there isn't that much focus on how important nature and the environment are to us, what we can and should be doing to be sure we preserve it for the future. I will probably have to write back on this too.

Sorry this one's a bit blurry - this letter came by email. 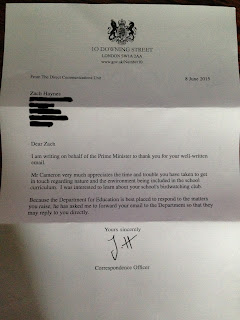 It might seem he avoided talking about the Fox Hunting issue and only talked about the Education Issue. The system to contact the Prime Minister only lets you write so many characters, which was a bit annoying as you can't say all that you want to. So I wrote two emails. One on fox hunting, which he hasn't responded to yet and another on education. His assistant replied on education but he didn't really answer that either... But it's better than nothing. I am still awaiting the Department of Education's letter but I will upload that on the nearest milestone to when I get it, unless they count the Minister of Schools letter as the response.

So, not much progress yet but I will be writing again in the summer.